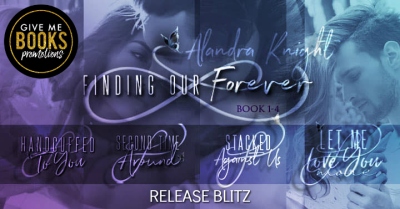 Title: Finding Our Forever Series Boxset
Author: Alandra Knight
Genre: Contemporary Romance
Release Date: September 25, 2020
BLURB
What if the great love of your life died unfairly?
What if everything you dreamed of went up in flames?
What if everything you thought you knew about your life was a fallacy?
Jaxson, Xander, Trent, and Liam Brentwood maybe the hottest single men in Morgan Springs, Colorado, but their lives are far from perfect.
Being single dads and holding down high demanding full-time jobs doesn’t leave much time for anything or anyone else.
What if you found love when you weren’t looking for it?
What if that person’s life collides with yours even though their past is heavy too?
Would you let the past stop you?
or
Would you take the risk if it meant finding your forever?
ADD TO GOODREADS 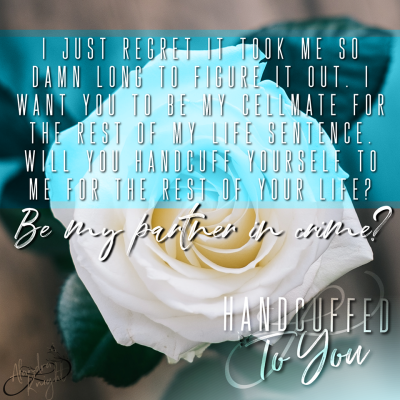 AUTHOR BIO
I am Alandra Knight. I write real feel romance with a healthy side of steam. I run on sarcasm, fueled by coffee.
I was born and raised in Ohio. Before I became an author, I was an event planner, so I tend to love a good party. I enjoy writing, crafting and hanging out with my readers over in my official hangout.
AUTHOR LINKS
FACEBOOK
FACEBOOK GROUP
INSTAGRAM
AMAZON
GOODREADS
BOOKBUB
NEWSLETTER

Release Date: September 21, 2020
Blurb
Elle Fiore wants a prince on a white horse.
Maverick Wallace does not fit the description.
It doesn’t matter they shared the best kiss of her life, or
her friends think he walks on water…and his Greek-god looks have absolutely
no effect on her whatsoever.
If only she can convince her heart he’s not for her.

Maverick is happy with his free and easy no-strings
lifestyle.
The last thing he wants or needs is someone complicated
like Elle.
He doesn’t do relationships or sleepovers.
She’s beautiful, but a diva with a capital D.

But something magical happens whenever they’re in a room
together, whether they want it to or not. 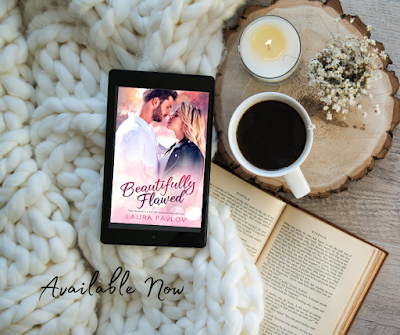 Excerpt
“Get your mangy mutt off me.” She covered her mouth with her hand to
keep Daisy’s urgent kisses away.

Hell, he couldn’t help but laugh, of course the spicy Southern prima donna
disliked dogs. And who the hell wore white dress slacks, a white blousy
tank top, and high heels to Lake Tahoe? It was like wearing a wedding dress to
a campground. He doubted the little princess was one with nature.

“Daisy.” He used a stern voice, which got her attention. Not the bitchy one
on her back, but the non-human bitchy one who couldn’t stop wagging her tail.
His pup moved obediently to his side, and Maverick reached for Elle’s hand
to help her up.

“Why are you smiling?” she hissed. He pulled her to her feet, and she
tore her hand away as if the mere contact burned her.

She dramatically brushed dirt from her pants.

“You all right, Peaches?”

“I’m fine, and you best call me by my name, seeing as I’m here for
professional reasons.” She stood straight, face flushed. “And why
haven’t you trained your beast of a dog? He probably ruined my outfit.”

“She’s a girl and just a pup. Still gets a little excited when people
come over, but I will tell you, not the wisest move to wear all white in
Tahoe.

It’s kind of an outdoorsy place, you know? I hope you brought other
clothes, for your sake.” He scanned her from head to toe. So fun to look at. A
gorgeous pain in the ass. 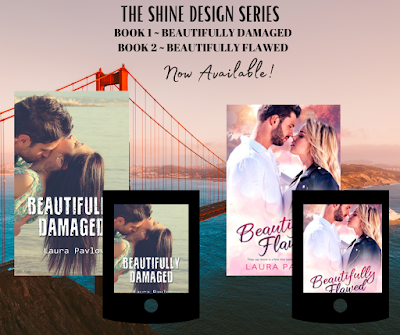 Laura Pavlov writes sweet and sexy contemporary romance that
will make you both laugh and cry. She is happily married to her college
sweetheart, mom to two awesome almost-grown kids, and dog-whisperer to a couple
crazy yorkies. Laura resides in Las Vegas where she is living her own happily
ever after.
Author Links
WEBSITE
PINTEREST
FACEBOOK
FACEBOOK GROUP
INSTAGRAM
GOODREADS
BOOKBUB
AMAZON 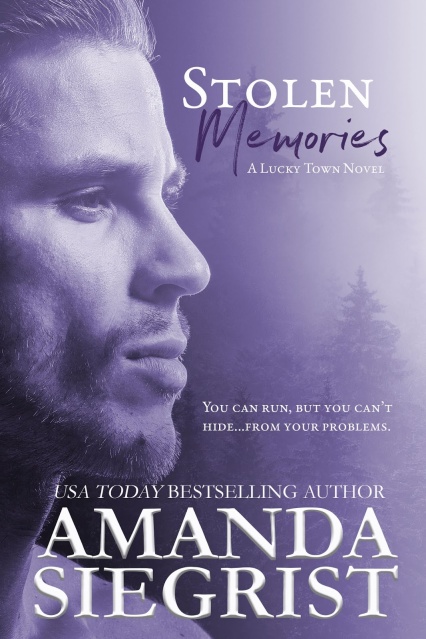 Blurb
You can run, but you can’t hide…from your problems.
As the baby of the family, Seth’s got the Youngest Child
Syndrome down pat. Except, he doesn’t want to act like a spoiled brat and cause
problems everywhere he goes. He needs to start by talking out his issues with
his best friend, Evan—until he can’t. Evan’s gone missing, his boss murdered.
Evan might be a liar—something Seth hasn’t forgiven him for—but he’s not a
murderer. Life’s about to get messier when his brother asks him to find Evan
with help from the new deputy. Pepper’s got a feisty attitude, a don’t-mess-with-me
persona, and the beauty of a goddess. If he’s not careful, he might fall in
love. But Seth suspects Pepper’s lying about something, too. And lying is an
unforgivable offense.
ADD TO GOODREADS

Excerpt
He poured some cheese dip into a bowl and put it in the microwave to
warm up. Then he grabbed another bowl and poured half the bag of chips inside
it. Carrying the beer and bowl of chips to the living room, he set it all on
the coffee table and went back for the cheese dip. The microwave dinged as soon
as he walked into the kitchen. Carefully, since the bowl was hot, he walked to
the living room once again.
She still hadn’t emerged from her bedroom. Not that it took him long to
prepare everything. Five minutes, if that.
What was taking her so long?
He should just take a seat and wait for her.
Except he found himself wandering down the hallway in search of her
bedroom. It didn’t take long to find. It was a small house.
Her bedroom door was open. She stood in front of her closet with her
back toward him in only a pair of pink sweatpants and a white bra.
He wasn’t sure if she was aware he stood in her doorway, but as a
gentleman, he should’ve turned around and waited for her in the living room.
But seeing her creamy, soft skin, the smooth curves of her body, the
exquisite picture before him, he found his feet moving forward instead of
backward.
The air crackled with intensity. Desire filled the room like heavy
smoke.
He stopped inches from her, yet didn’t touch her. He heard her inhale
deeply, indicating she knew he was there. But she didn’t turn around.
Raising his hand, he glided it as if he were caressing her from her
shoulder down her arm, yet he didn’t touch.
“God, you’re so beautiful. I want to touch you so badly.”
“You shouldn’t be in here.”
“I know. I didn’t know what was taking you so long.”
She stood rigid.
The last thing he wanted to do was make her uncomfortable, but damn, he
was dying to touch her. To make her feel what he felt—charged with pleasure
waiting to be unleashed.
“I’m sorry. I’ll wait for you in the living room.”
His hand hovered near her shoulder, then he snatched it away and turned
around. He got three steps before she spoke.
“I said you shouldn’t be in here, not that I wanted you to leave.”
He turned around slowly.
She was facing him, her eyes dilated with the same intense pleasure he
felt flowing through his veins.
His jaw clenched, his hands aching to pull her into his arms.
“What do you want?” He took a step in her direction. “Because I want
you. I want to touch you until your body has memorized my touch.”
He didn’t know where those words came from, but they were true. He
wanted to claim her until she begged him never to leave.
Less than a week, and he wanted this woman with so much passion it
physically hurt to think he might never have her.
Her hands reached up and slid one strap down her arm. Then she reached
for the other side and slid that one down, too. Her bra hung on, barely.
“I want you to touch me.” She bit her lip before removing the bra completely.
He didn’t hesitate. He didn’t give her time to change her mind,
although her eyes said she wasn’t planning on it.
He pulled her into his arms and kissed her like it would be the last
kiss they ever shared. 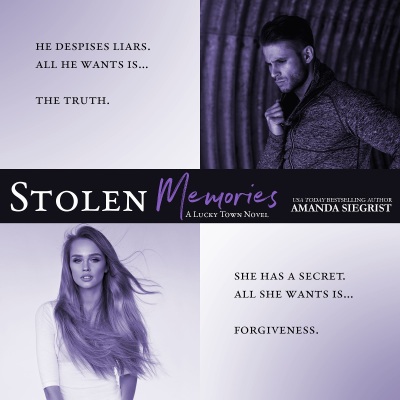 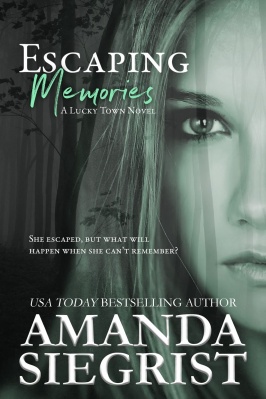 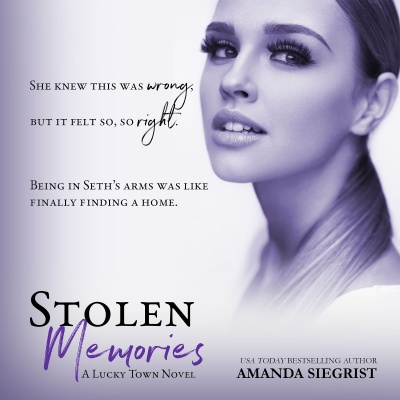 I’m a USA Today Bestselling Author that loves to write sweet
contemporary romance and romantic suspense novels, although I am partial to
romantic suspense. Honestly, I love anything that has to do with romance. As
long as there’s a happy ending, I’m a happy camper. And insta-love…yes, please!
I love baseball (Go Twins!) and creating awesome crafts. I graduated with a
Bachelor’s Degree in Criminal Justice, working in that field for several years
before I became a stay-at-home mom. I have a few more amazing stories in the
works. If you would like to connect with me or see important news, head to my
website at http://www.amandasiegrist.com.
Thanks for reading!
Author Links
AMAZON
BOOKBUB
FACEBOOK
FACEBOOK GROUP
GOODREADS
INSTAGRAM
NEWSLETTER
PINTEREST
TWITTER
WEBSITE