She needs a hero. He needs a second chance.
Single mom Ginny Weaver needs a hero. Not an average hero. Not an everyday hero. A full-fledge, honest to goodness, super-duper A-list movie star, comic book action hero.
And she’ll do anything to get one.
Liam Stone is a washed-up, has-been, former Hollywood superhero – now dubbed “the super zero”.
He isn’t what Ginny needs.
But Ginny’s six year old daughter is sick and she has one last wish…
So, Ginny and Liam make a deal. Ginny will get a cape-wearing superhero for her daughter and Liam will get his chance at redemption.
But deals come with unexpected consequences, like questioning what really makes a hero, or a family, and whether or not love has anything to do with it.
Maybe, just maybe…love makes heroes of us all
A feel good, heart-warming contemporary romance about the power of hope, family and love. 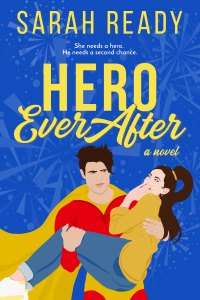 “Sarah Ready is the best kept secret in contemporary romance…If you’re looking for a book that tickles your funny bone and tugs on your heart strings in the most exquisite way, this charming, witty story full of all the feels is your next amazing read!”

“hands down one of my favourite authors…I love this book! Would give more than 5 stars if I could!”

“This book brought me to tears! I loved everything about the book, the characters, plot everything! A book that you do not want to miss!”

“Hero Ever After is a feel good, happily ever after, romance read. I can’t even begin to tell you how much I adored this book.”

Excerpt from Chapter One Hero Ever After by Sarah Ready

I love heroes. Everything about them. Their strength, their honor, their  devotion, their pursuit of the ultimate goal in the face of unsurmountable odds. A  hero always does what’s right, always wins, no matter what. Right now, more than  anything in the whole wide world, I need a hero. I’m broke, widowed, a whisper  from the edge, and my baby girl’s dying—she wants a hero, and by all that’s holy, I’ll  get her one. I’ll get her the greatest superhero of all time. I’ll get her Liam Stone.

I glance to the backseat of the car. Bean’s strapped in her car seat. Her sixth  birthday was last week and she’s working through the pile of comic books that she  got for her present.

“Do you think he’ll lift a car?” she asks. “When he fought The Red Spider he  lifted a car over his head and crushed him.”

I take my eyes off the washed out dirt road and look in the rearview mirror.  “I don’t know, Bean. I don’t know if retired superheroes still do that stuff.” Two lines pucker between her forehead as she thinks my answer over. “But  he’ll still train me?”

“If I have to wrestle him to the ground and force him.”

She giggles and I nearly lose my breath at the happy sound.

“Downtrodden,” I say with a wry smile.

“He’ll be happy to see me. I bet he’s been wanting a protégé for years. All the  best heroes have ’em.”

I raise my eyebrows. Since when did she start using words like protégé? “You  let me do the talking, Bean.”

“I know.” She buries her nose back in the comic book. I can barely see the top  of her bald head over the bright cover of the comic.

I breathe through the pinch of panic that comes every time I see evidence of  her being sick. Push it aside.

Anyway, we’ve made it. We’re ten miles outside of Centreville where Route  511 crosses Route 511B and turns onto Pine Tree Road. Southern Ohio is full of  fallow land sold for cheap, you can snatch up hundreds of acres, and be left alone for  the rest of your life. Which is, I guess, what Liam Stone was hoping for. He bought  the land two years ago when he literally fell from Hollywood stardom.

At first, everyone in town was starstruck, waiting for the day he’d come to  Main Street so they could go gaga over him. But he never came. Two years on, no  one in town has ever laid eyes on him. And no one has ever been brave enough to  come out and introduce themselves—extend a neighborly hello. Nope, we’ve all just  left him alone.

Sarah Ready is a novelist of romantic comedy, contemporary romance and women’s fiction.
She writes stories about finding love – and all the humor, heart and adventure that entails.
Her first novel The Fall In Love Checklist was called “…my #1 read of 2020”. You can find receive bonus content, exclusive excerpts and sneak peaks by signing up for her newsletter at: www.sarahready.com/newsletter