Jim “Liar” Huntley’s loyalty to the Riot MC brotherhood is unquestionable. Especially since before becoming a fully-patched member, he killed a man to protect a brother. When a favor to another brother forces him to meet Andrea Paglia, he knows she’s out of his league. Making matters worse, she is off-limits because she’s old friends with the President’s old lady. Weeks later, Liar notices his brothers ogling Andrea at a club party, and he cannot restrain his anger.Andrea falls in lust with Liar the moment he walks into her massage studio. She senses Liar restraining himself around her, but she’s determined to go after the man she wants. For once, she grabs what she wants from life. Conflict arises when former co-workers implore her to lend them a hand during the holidays. Forced to tell Liar about her past, she uncovers another facet to her alpha biker. Little does Andrea know, she’s being used as a pawn in a larger scheme to bring down the Riot MC. Liar believes Andrea deceived him and will not be betrayed twice. The perceived deception tears Liar and Andrea apart while also forcing a rift between the Riot MC brothers.Liar discovers he was wrong, and struggles between guarding his heart and asserting his love for her. Will he be able to claim her as his own? 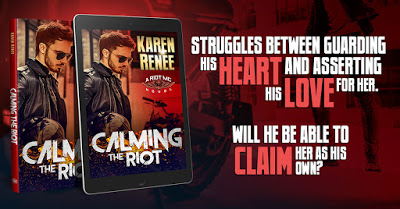 Karen Renee has wanted to be a writer since she was eight years old, but it’s taken the last twenty years for her to amass enough courage and overall life experience to bring that dream to life. Some of those life experiences came from the wonderful world of advertising, banking, and local television media research. She is a proud wife and mother, and a Jacksonville native. When she’s not at the soccer field or cooking, you can find her at her local library, the grocery store, in her car jamming out to some tunes, or hibernating while she writes and/or reads books.