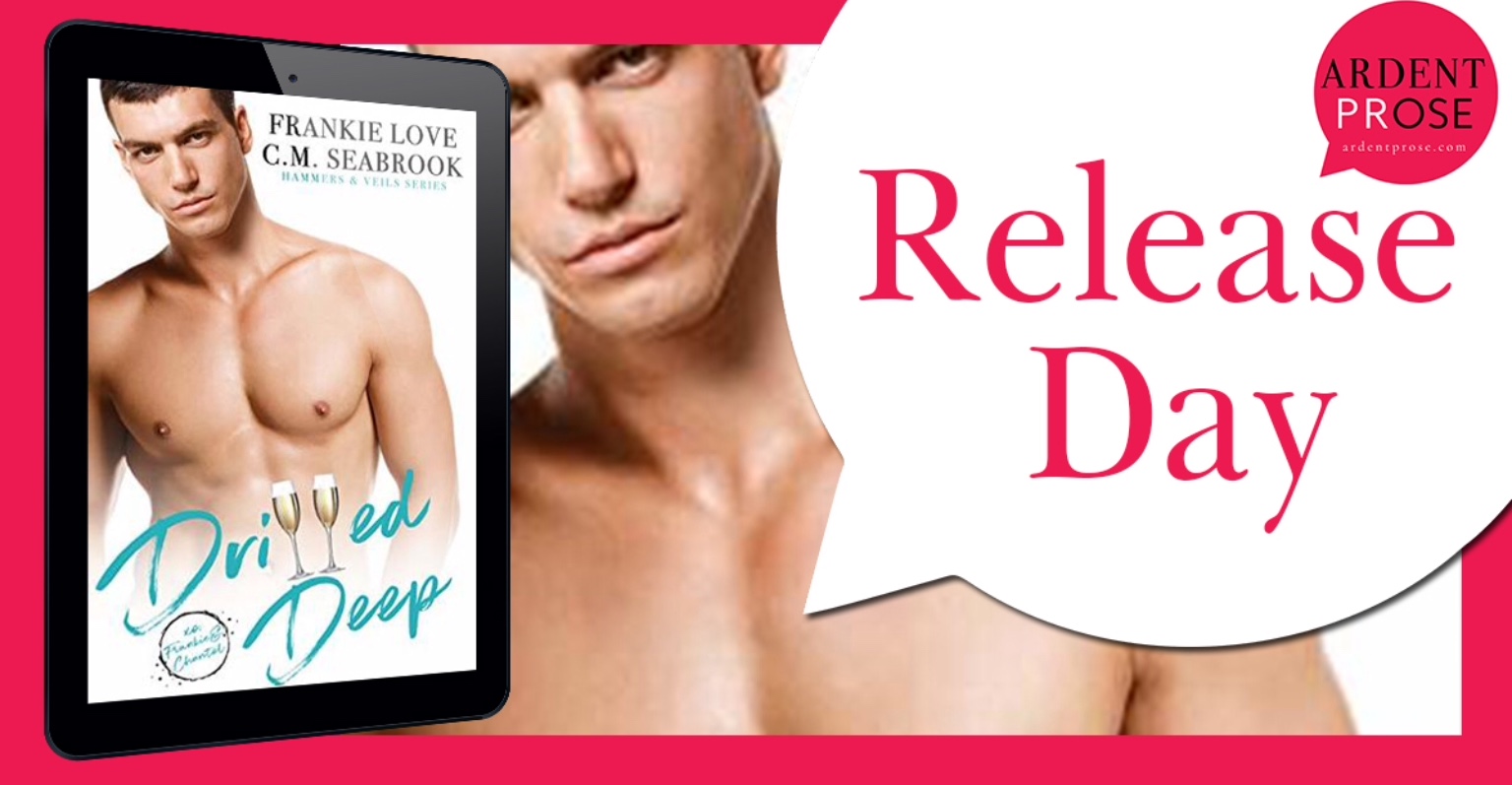 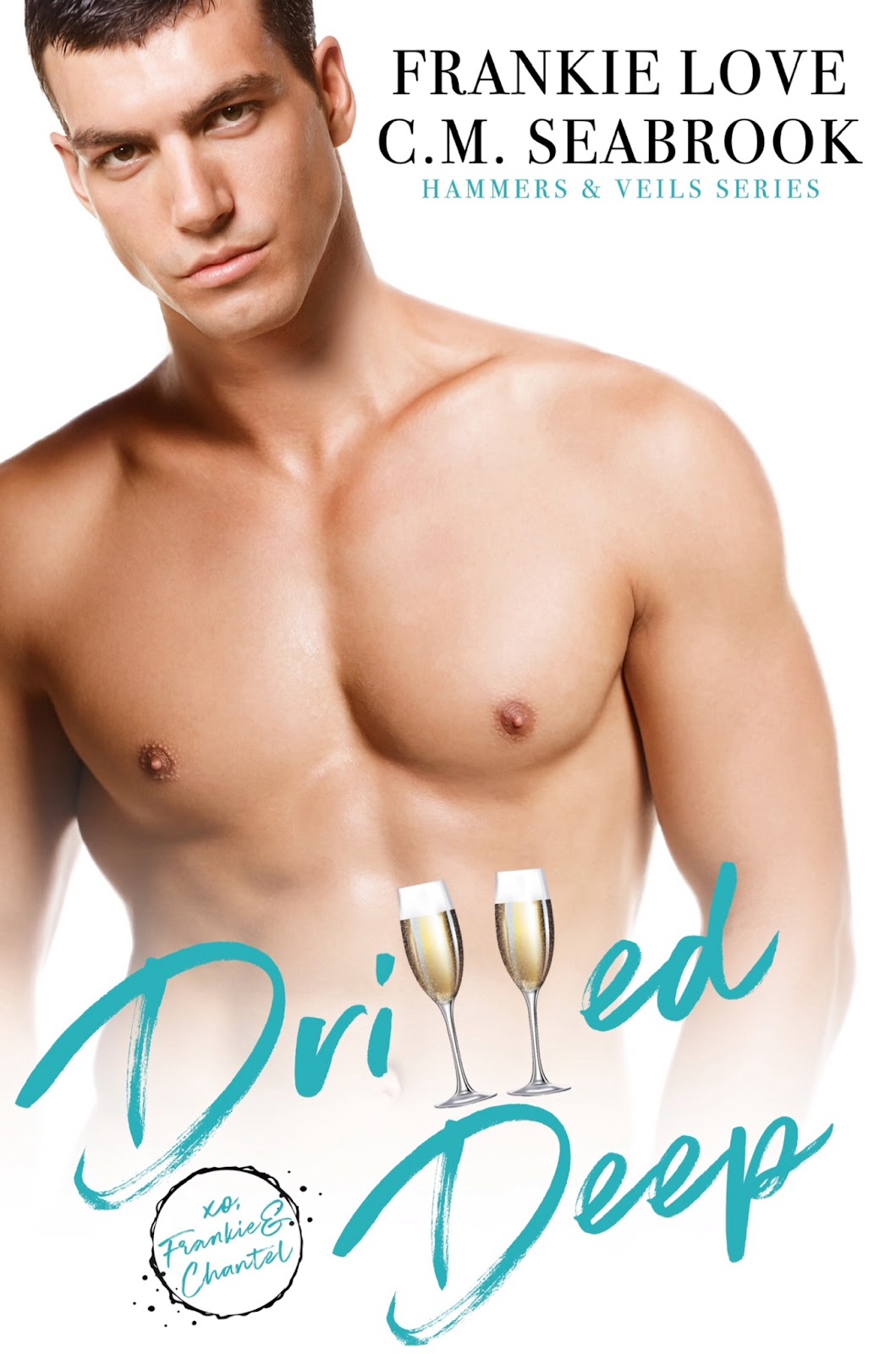 Before today I wasn’t sure I believed in love-at-first-sight.

Now? Hell, I feel like my heart’s been drilled deep.

Ana Clemente fills it. Entirely. Problem is, how exactly do I explain that to this sweet little bookworm without scaring her away?

She’s young, innocent, and way out of my league.

I’m a salt of the earth man; I believe in family, faith, and forever.

It’s time I prove to Ana that I want to do more than build her some bookshelves.

I want to build a life with her.

Colton King’s the brawny beast you’ve been waiting for.

He’s a man on a mission.

She may start off as a virgin, but pretty soon she’ll know what all the fuss is about. Our blue-collar hero will make sure of it! xo, Frankie & Chantel

Hammers and Veils is a series of short and flirty stories sure to make you melt!

“Damn,” I say as I pull my truck to a stop in front of the Clemente mansion. The house is on private grounds just outside the city, and while I’ve heard about the size of the place, I wasn’t prepared for how big it actually is.

Compared to the two-bedroom ranch where I grew up, the place looks like Buckingham Palace.

Sure, now that Nailed It Construction has taken off, I live more than comfortably these days. I no longer share an eight by ten bedroom with my twin brother Dillan, even though I still manage to make it back home every Sunday for one of my mom’s home cooked meals.

I bought my house, or rather the property eight years ago, right out of high school. Saved the money I earned every summer working at the timber yard until I had enough to buy the land outright. It only took me another four years, and a lot of sweat and tears, not to mention free labor from my friends, Mason, Porter, and Eli, to build my dream house. A five-bedroom, four-car garage ranch with all the bells and whistles, and enough room inside and out to eventually have a brood of kids running around.

Not that I’m anywhere close to that happening-the whole family thing. It’s been years since I’ve had anything even resembling a relationship. I’m not a player, but I’m also not interested in settling down with someone who I know isn’t my match. The guys used to give me a hard time about my romantic notions of soul mates and love at first sight-until it happened to them. But I grew up hearing my parents’ stories about how they first met, and how my dad knew the moment he saw my mom that she would be his bride. Two weeks later they were married and a year after that they had me and my brother.

We never had much growing up, but what we had a lot of was love. And I made a promise to myself years ago that I wouldn’t settle for anything less.

You can have money and success, but without someone to share it with, what’s the point of life?

I rub the back of my neck and take in the mansion. The architecture is definitely turn of the twentieth century with large pillars and impressive stonework. Despite that the place looks abandoned, the grounds have undoubtedly been maintained by a professional gardener.

But the place feels cold. Empty. A house, but not a home.

It makes me wonder about the woman who owns the place. I’ve always believed that a house is a reflection of a person’s soul. And if my theory is correct, I’m in for a real treat with Ana Clemente, the woman who inherited the place six months ago.

“She’s some type of heiress.” Mason had said handing me the job details, his lip curling up in a sneer when he said it. “You can have the job. I’m not in the mood to deal with some socialite brat.”

“Thanks,” I’d muttered, taking the file, even though I was secretly intrigued.

It’s just a simple carpentry job according to the notes. And even if Mason is right, and the woman turns out to be a handful, the work shouldn’t take me more than a few days.

I grab my toolbox out of the back of my truck and head up the long stone stairwell toward the double, solid wood doors, and ring the doorbell.

When no one answers, I ring it again, expecting to be greeted by a butler with an English accent, or a maid in one of those little black and white outfits carrying a feather duster.

But when the door opens, I’m not prepared for the woman who greets me.

The first thing that strikes me is how tiny she is, especially compared to my massive six-foot-four build. But it’s her eyes, a rich chocolate brown hidden behind a pair of oversized glasses, that grab my attention and don’t let go.

Shit, the girl is beautiful, but in an unassuming way. Her chestnut hair is piled high on her head in a messy bun, and she uses her index finger to push her glasses up her nose. Her face is free of makeup, and there’s a splattering of freckles across her cheeks, which have turned a deep shade of pink.

Then she smiles, and I swear I forget to breathe. The woman isn’t just beautiful, she’s gorgeous. It’s like sunlight infuses her, pours from her, warmth and a subtle strength that makes me want to pull her into my arms and kiss her.

Hell, I want to do more than just kiss her.

But I don’t even know her name.

“Hi,” she says, looking up at me expectantly.

I clear my throat and hold my hand out. “Hi. I’m Colton King.”

She looks down at my outstretched hand, pulls her bottom lip between her teeth, and I see a flicker of uncertainty.

“Colton King?” My name on her lips has all sorts of fantasies playing out in my mind. But I see the apprehension when she says it. “Do I know you?”

I realize that I’ve been standing here awkwardly for the last couple of minutes without any explanation of why I’m here. But god, the woman has me all twisted up inside.

One look, my father’s words tumble through my head. And I knew she was the one.

I shove the thought away, because I’m not here for this sweet little thing in front of me, I’m here for a job.

Pulling my hand back, I run my palm over the scruff on my jaw. “I’m from Nailed It Construction. I’m here to do some work on the library. Building new shelves? Is Ana Clemente here?”

“Oh right.” She lets out a little breath. I see some of her tension disappear, and she opens the door wider, allowing me to enter. “Sorry. I don’t get a lot of visitors.” This time it’s her who holds out her hand. “I’m Ana.”

I know my brows raise and my mouth drops open, but I can’t help the reaction. With one look I’d come to a million conclusions about the innocent beauty in front of me. I’d figured she was the maid, or maybe a distant relative, but it’d never crossed my mind that she was the heiress.

Mason said Ana was a socialite, a brat-but one look at this sweet thing and I know he was wrong.

She’s more than an heiress who needs some work done to her house.

Before today I wasn’t sure I believed in love at first sight.

Now? Hell, I feel like my heart’s been drilled deep. Ana Clemente fills it, entirely.

Problem is, how exactly do I explain that without scaring her away?

Frankie Love writes filthy-sweet stories about bad boys and mountain men. As a thirty-something mom who is ridiculously in love with her own bearded hottie, she believes in
love-at-first-sight and happily-ever-afters. She also believes in the power of a quickie.

You can find her at FRANKIELOVE.NET or on FB.
Frankie also writes under the pen names CHARLIE HART.