In this hot new angsty romance from USA Today bestselling author BJ Harvey, the once-burned-forever-commitment-shy best friend from One Shot faces her own moral dilemma of the heart
When life gives me lemons, I always make lemonade.
Living every day like it could be my last, I’m content with the choices I’ve made and do so unapologetically. With a relationship that makes me happy, and a job that I love, life is good.
But when the man I’ve just agreed to marry, has his estranged wife and five-year-old daughter turn up on his doorstep, I’m not the only one reevaluating things.
He didn’t plan for that—and I didn’t plan for my childhood sweetheart to return, wanting me back.
Sometimes lemons can be sour, sometimes they can be sweet, and sometimes, all it takes is a second chance to make things right again.
You just need to get that second chance in the first place.

BJ Harvey is the USA Today Bestselling Author of the Bliss Series. She regards herself as a smut peddler, suspense conjurer, and a funny romance thinker upper. An avid music fan, you will always find her singing some hit song badly and loving every minute of it. She’s a wife, a mom to two beautiful girls, and hails from what she considers as the best country in the world—New Zealand—although she currently lives in Perth, Australia. 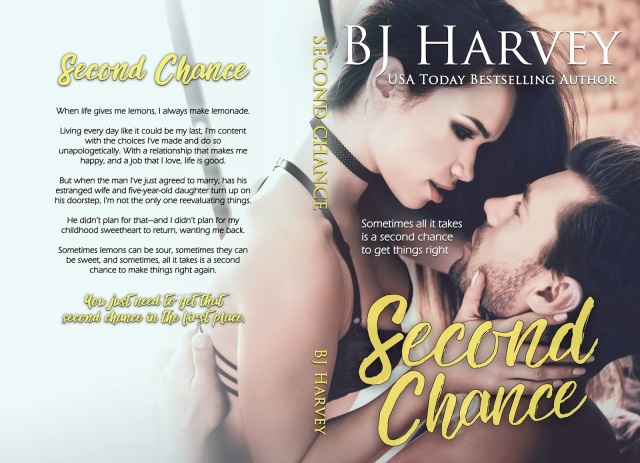