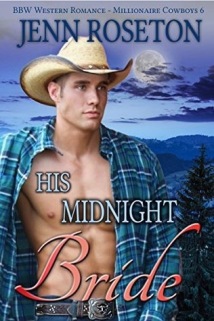 When curvy April Larch visits rancher Rem Coltson at midnight, needing to talk to him about an article he wrote about a mysterious flag dating back to the Civil War, she has no idea she’s about to set off on a wonderful adventure – or find the love of her life.

An assistant professor of history, April has buried herself in researching the 1800s after a disappointing love affair. But now, with Rem Coltson by her side as they follow clues left by her great-great-grandfather, can she overcome her past and trust in a glorious future with Rem?

Or will she allow her insecurities to overshadow her present and her future?

This is a contemporary romance novella of 35,000 words and can be read as a stand-alone.

You may also enjoy:

His Midnight Bride by Jenn Roseton

This is the last book in this series; it features youngest, but no less sexy, brother Rem Coltson and the woman he wants, April Larch.

This was a wonderful sweet series and I hate that it’s over. I have enjoyed all the brothers’ stories. My favorite was “His Tempting Bride.” This last novella was my least favorite but I stilled enjoyed it.

April is an assistant professor of History and to say she is a history nerd is an understatement. When she comes across some mysterious clues at her late grandfather’s house, she immediately has questions. Ones she can’t answer herself. The clues reference to a specific item that she is not too familiar with. However she knows of someone who might be able to help.

Rem is a rancher, however he has a huge passion for history. He is very intelligent and actually could have been a university professor if he wished that career but Rem loves ranching. When April shows up unexpectedly one late night, Rem in unprepared for the instant attraction he has upon seeing the beautiful, intriguing April at his door.

What follows is a fun and suspenseful adventure as they follow clue after clue that they find together. A treasure hunt, so-to-speak. The author did a great job integrating the historical aspect, blending light suspense with romance. I would not call this book angsty at all. Slightly mysterious? Yes.

Rem and April’s romance developed slowly. Rem was a strong character, well developed and intelligent as well as cowboy sexy. April was just okay for me. Her constant insecurities were a bit much and she let that take too much control of her life.

All that being said, I enjoyed this book as well as the series and I’m sad that it’s over. I look forward to what Jenn Roseton comes out with next.