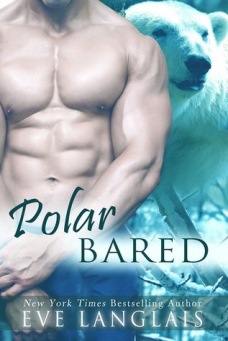 What’s a bear to do when a human has a polar-izing effect?

When Vicky accidentally slides into the side of a polar bear, she doesn’t expect to fall in love. Eaten yes, perhaps used as a chew toy, but become the object of a bear’s affection and lust?

Crazy! Almost as crazy as the fact the polar bear turns out to be a man. A sexy man. A man who growls, and roars and does everything he can to chase her away.

Only to come back.

Gene only has one thing on his mind, vengeance, until Vicky crashes into his life.

Poor Gene. After the pain and betrayal he suffered in the war all he wants is revenge against the brothers who left him behind. But he’s confused when instead of wanting to punish him for his evil acts, they offer him forgiveness.

As if that weren’t annoying enough, the cutest geek he ever met–with caramel kissed skin and wearing the sexiest dark rimmed glasses–won’t leave him alone. Or more like, he can’t seem to stop following her.

And it isn’t just because someone is out to hurt her.

He wants her. But does he want her more than vengeance?

Welcome to Kodiak Point where the wildlife might wear clothes, but animal instinct rules the heart.

4.5 Stars! “Polar Bared” Kodiak Point #3 by Eve Langlais is the third book in this series. Here we have a sweet love story, one I was so excited to read. This one is about a revenge seeking polar bear shifter, Gene and the adorable, geeky, curvy human woman he can’t seem to get away from. A perfect example of “opposites attract.”

Without giving too much away , I need to say Gene was set on a journey of revenge, not caring who was in the path to it. We meet Gene for the first time in “Kodiak’s Claim,” book one in the series. Gene makes another appearance in the second book as well, “Outfoxed By Love.” When I found out the third book was his story, I was already plotting where to hide and lock myself away. If you think Gene was an angry character, try getting in my way when I’m in my “Oh damn I have to read this now! Stay the Hell away!” mood. There are some books that just need to be read that way.

As bad tempered as Gene was, he had a near instant soft spot for Vicky, his “Pima.” (Sorry you’ll just have to read for yourself to find out where that nickname came from.) No matter how many times he came to Vicky’s rescue (she needs plenty of rescuing) 🙂 Gene keeps pushing her away.

Gene has revenge to plan and the last thing he needed was a distraction in the form of his adorable, geeky Pima.

Vicky was in danger. Not from Gene, although he’d argue that she was. The danger that follows her isn’t even from the continuous attacks to Kodiak Point. Vicky has her own trouble following her. And while that danger is in addition to the Kodiak issues, Gene must put his plans for revenge aside to protect Vicky. Will Gene ever take a chance on the love Vicky wants to give him? Will he put away his need for revenge and let himself be happy? Gene was a complex, tortured character and I completely understood why he felt the way he did. I understood his actions and I forgave him for his past evil deeds.

Vicky was adorable, quirky and she made me laugh out loud. A wealthy widow with no real friends or family. Her fascination with the arctic, particularly polar bears, brings her in close contact with Gene. Or should I say, Gene’s bear. Vicky was afraid but there was also the factor of awe and wonder that she came so close to the bear and wasn’t eaten. Vicky was funny. She was also caring and compassionate. Vicky easily fell in love with Gene despite his gruff and grumpy nature. She loved him before she knew he was a bear. Watching Gene and Vicky fall in love was sweet and endearing. I was especially happy for Gene. He never believed that anyone could love him the way he was. Watching his walls come down, one by one, made me love him even more. Of all the Kodiak Point shifters, I truly believed Gene deserved his HEA the most.

The next in the series (after the Christmas novella, “Caribou’s Gift”) is “Wolf’s Capture,” where we are even closer to the true enemy of Kodiak Point!